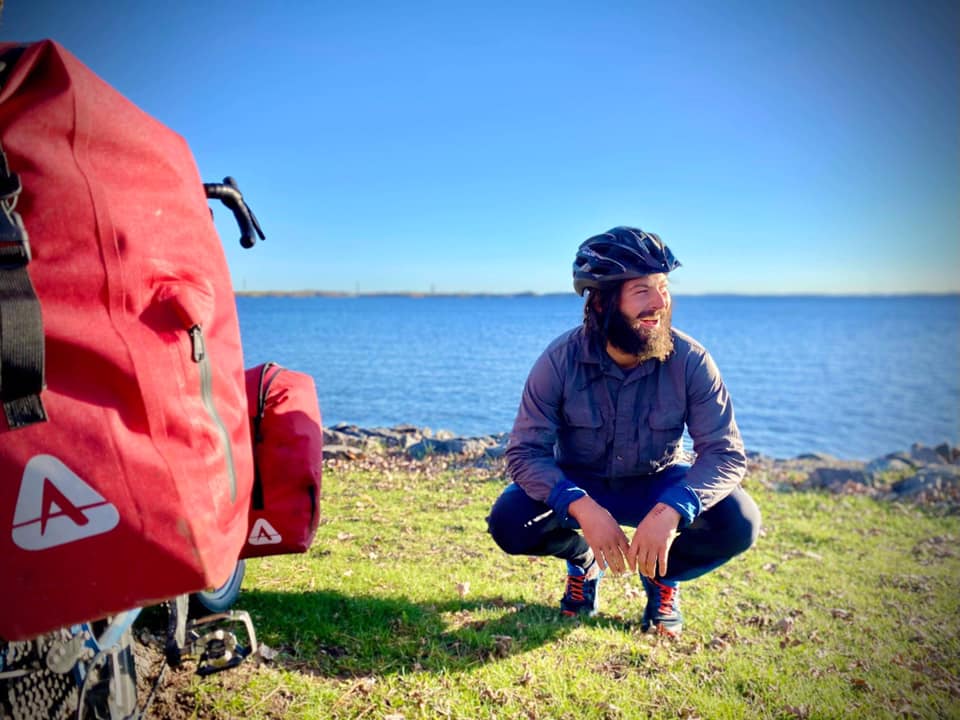 After nearly eight months and 7,600 km, Guillaume Moreau and Nicolas Roulx have completed their epic multidisciplinary expedition from northern Ellesmere Island to Point Pelee National Park in southern Ontario, near the border. Canadian-American.

Their nearly north-south project may be the longest wilderness expedition in Canada since Knud Rasmussen’s fifth 30,000 km Thule Expedition in 1921-24. The Moreau and Roulx course consisted of two ski sections totaling 1,450 km, two canoe sections totaling 2,000 km and a final 4,150 km race to the south-east by bike.

Team progress is marked with black pins and the red line shows their original route plan. The map has stopped updating in Sault Ste. Marie a few days ago, but the team has now reached its end point in Point Pelee National Park. Photo: AKOR Expedition

Along with their friend Jacob Racine, Roulx and Moreau opened the expedition on March 19 with an 800 km run from Eureka weather station on Ellesmere Island to Resolute. They suffered polar rashes, knee injuries and long periods of zero visibility while traveling 20 km per day.

Although they initially billed the expedition as a complete vertical crossing of Canada, the additional cost of $ 30,000 to fly to Cape Aldrich, north of Ellesmere Island, forced them to settle for ‘a route almost north of about 680 km.

From Resolute, the trio had to further re-evaluate their route to Gjoa Haven. Barrow Strait, the channel between Cornwallis Island, on which Resolute is located, and Somerset Island, had broken. It was now mostly open water. Rather than risk the crossing, they chartered a plane to fly them 80 km over the gap to the safe ice next to Somerset Island. 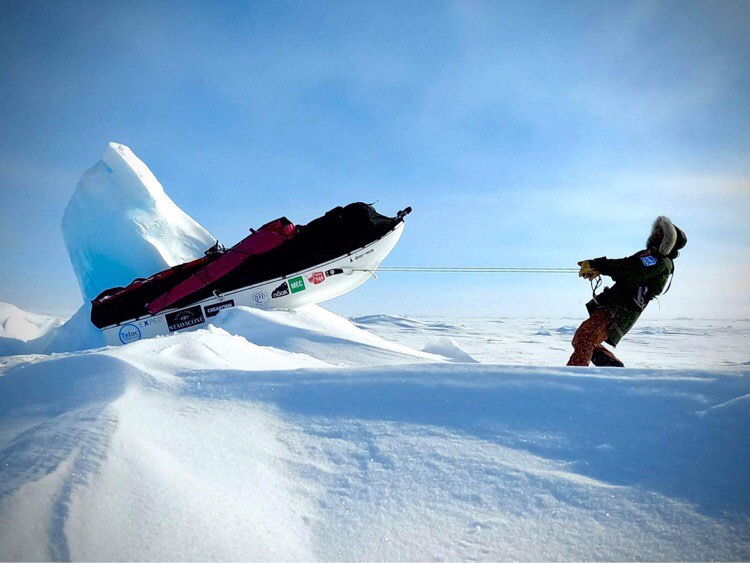 The start of their journey, in the great cold of mid-March, was particularly demanding. Photo: AKOR Expedition

After having completed the 80 km, Moreau, Roulx and Racine still had 600 km to ski. The spring ice was much better than further north, offering superior glide and allowing for a few days of 30 km.

At Gjoa Haven, Racine left the team as planned and Philippe Voghel-Robert and Etienne Desbois joined Moreau and Roulx for the 700 km canoe trip inland to Baker Lake. Their ski trip from northern Ellesmere had been physically and mentally exhausting. Moreau and Roulx were delighted to switch to their main discipline, canoeing. But first, they had to reach the thawing streams.

Originally, they planned to travel up the Back River to the heart of Canada. However, the cold spring and the onset of cool summer meant that rivers and lakes were just starting to break apart.

Skiing on the river in the event of a break would be too dangerous. Instead, they headed further west, using a network of smaller rivers and lakes to progress. Switching the canoes from ice to water and back again, sometimes several times a day, was a punishment for both the team and the canoes. 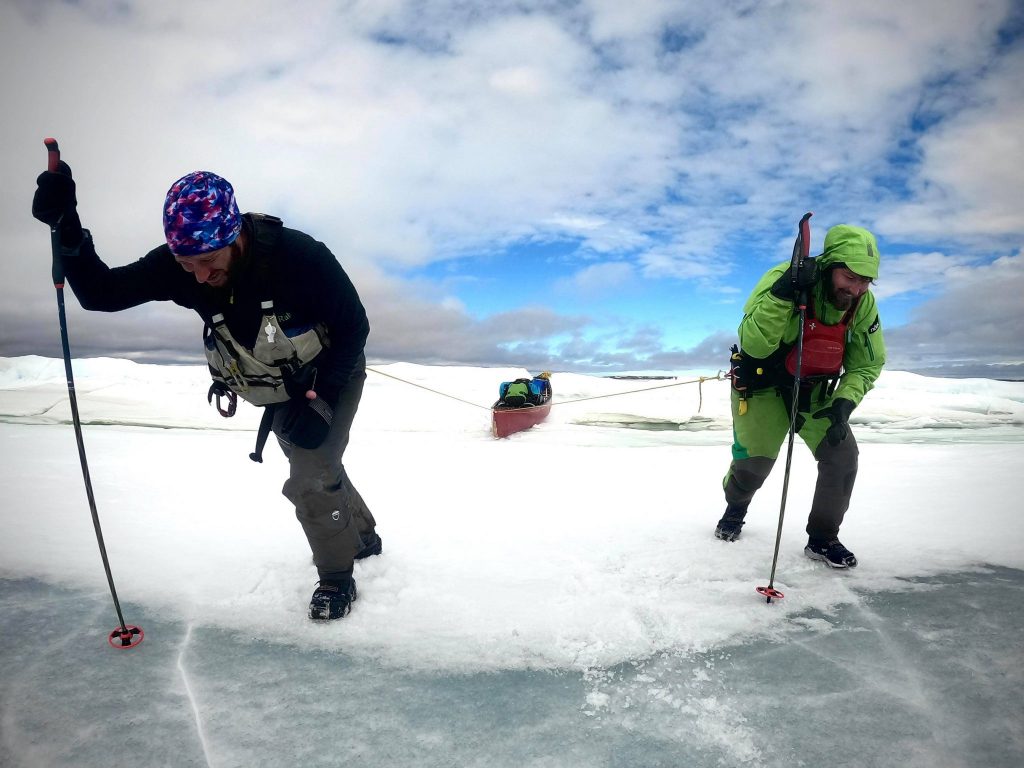 Finally, by mid-July, the lakes had melted and the last leg of their trip to Baker Lake could be done in a more traditional way. But perhaps the transport of the canoe has taken its toll beyond the physical. Unexpectedly, Voghel-Robert left the expedition at Baker Lake. Catherine Chagnon, Moreau’s girlfriend, stepped in to fill the void, and the expedition continued south, originally to Black Lake.

This section involved a lot of paddling uphill, but it was the horrible weather that derailed them. “There was a lot of hauling but the rivers went well,” explained Moreau, “but every time we were on a large lake, we were facing the wind. It was not difficult to paddle, it was impossible.

They were only able to paddle 10 of their first 18 days after Baker Lake. For the other eight days, they closed the hatches and hid from the elements. The appalling conditions necessitated an emergency food pickup from a lodge on Lake Kasba and another major rerouting. To get back to Black Lake from Kasba Lake, they should have gone north and west, adding many more miles. Instead, they headed straight south on a “very crappy line.”

Despite the difficult canoe sections, at the end of September they took their first route of the entire expedition and switched to bicycles. Isabella Donati-Simons and Béatrice Lafrenière joined them for the last round. They traveled the last 4,150 kilometers and arrived at Point Pelee National Park in southern Ontario on November 8.

“We went to soak our feet in Lake Erie, at the end of the sand point that represents the southern end of Canada,” they said. In the end, it took them 234 days, or seven and a half months. 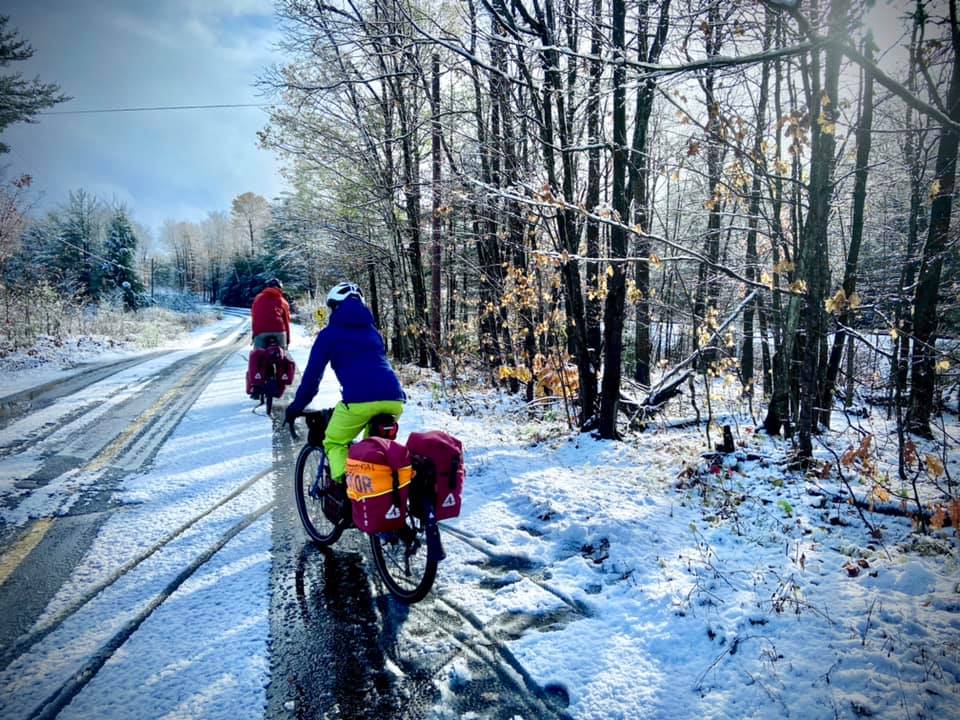 Moreau and Roulx have known each season, starting in early spring and ending in early winter. Photo: AKOR Expedition

The extent of the Moreau and Roulx route is astounding. An epic venture from the frozen north through vast expanses of Canadian wilderness to near the US border, every stop on their journey would be an awe-inspiring self-guided expedition. Together we have a strong contender for the most impressive expedition of 2021.

Martin Walsh is a freelance writer and wildlife photographer based in Da Lat, Vietnam.

A graduate in history from the University of Nottingham, Martin’s career arc is something of a smörgåsbord. A largely unsuccessful basketball coach in Zimbabwe and the Indian Himalayas, a reluctant business lobbyist in London, and an interior design project manager in Saigon.

He had the chance to see part of the world. Highlights include tracking tigers on foot in Nepal, whitewater rafting on the Nile, blasting your way from London to Istanbul on a bicycle, feeding wild hyenas with its face in Ethiopia, and accidentally interviewing Hezbollah in Lebanon.

His areas of expertise include adventure travel, hiking, wildlife, and half-forgotten indie rock bands from the early 2000s.