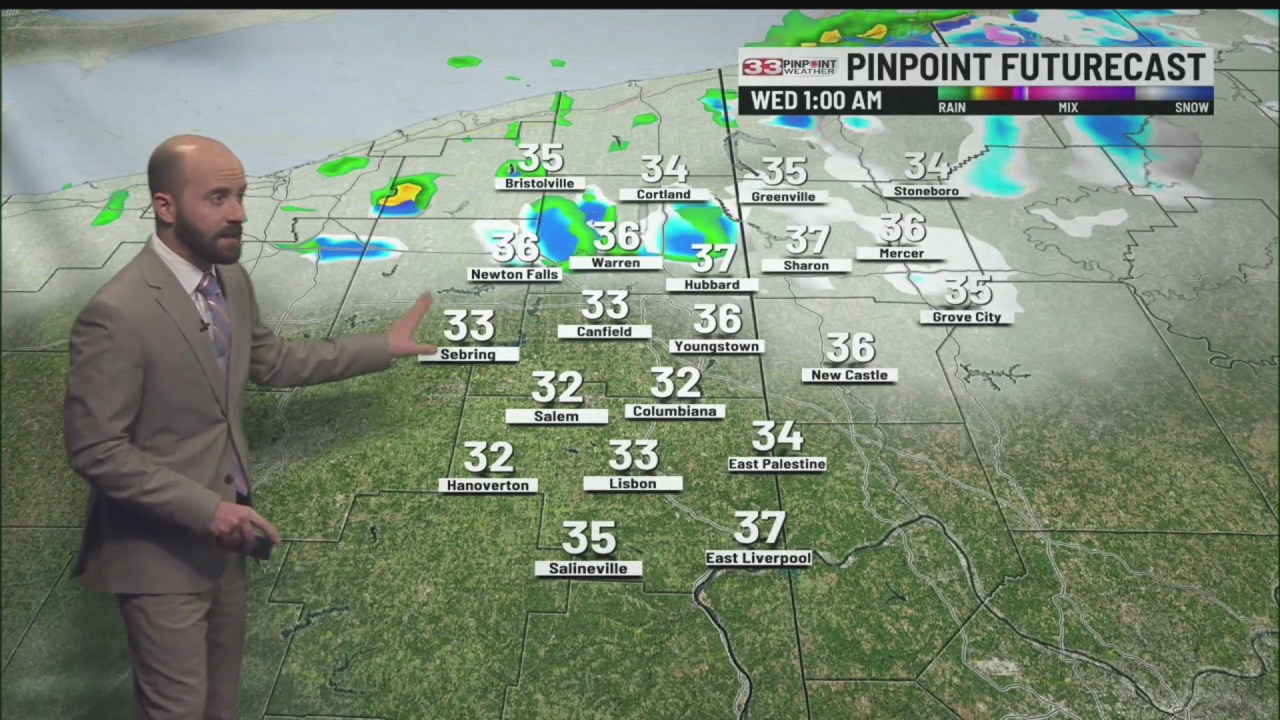 THIS EVENING
Scattered showers will begin to penetrate Trumbull and Mercer counties on Tuesday evening. As temperatures drop, showers will mix with snow showers overnight.

Most of the precipitation will occur north of Interstate 80, although a few isolated flurries and flurries are not excluded in Mahoning and Columbiana counties. The lows will drop into the lower 30s, to about to slightly below freezing. This will increase the potential for a small build-up.

A blanket of sleet to an isolated 1 ″ is possible in northern Trumbull and Mercer counties. Little or no accumulation is expected south of Youngstown.

Snow won’t have much of an impact on travel, but a few slippery side roads aren’t completely out of the question. Bridges and viaducts should also be monitored in the morning.

A brisk breeze will continue through the night, sometimes causing wind chills in the 1920s.

WEDNESDAY
Flurries and scattered flurries will continue Wednesday morning. We will continue to see occasional flurries, mingling with rain as temperatures warm, throughout the morning.

Isolated showers or showers remain within the forecast for the afternoon, primarily north of Interstate 80. The remainder of the area will see scattered cloud with spikes of sunshine.

It will be cold with highs in the lower 40s and a brisk wind keeping the wind chill in the 30s most of the day.

Periods of rain, flurries or flurries are still possible Wednesday evening, mainly in the northern snowbelt. We will see scattered clouds at night.

Temperatures will drop to around 30 ° C for overnight lows.

THURSDAY
The possibility of a mix of rain showers and flurries continued Thursday, mainly in northern Trumbull and Mercer counties. The sky will be mostly cloudy throughout the day, with highs in the lower 40s.

Isolated showers from the snow belt, mixing with the snow, remain within the forecast Thursday evening. A change in wind Thursday evening will put an end to any precipitation early Friday morning. The minimums will be in the 20s above about 30 °.

LOOKING FORWARD
We envision a pleasant but cool work weekend with mostly sunny skies on Friday. The highs heat up to the upper 40s.

Dry weather continued on Saturday with mostly sunny skies and highs hitting the 50 low. With little disturbance comes a small chance of having a passing showers or two on Sunday.

For a detailed breakdown of the next seven days, click play on the video above.