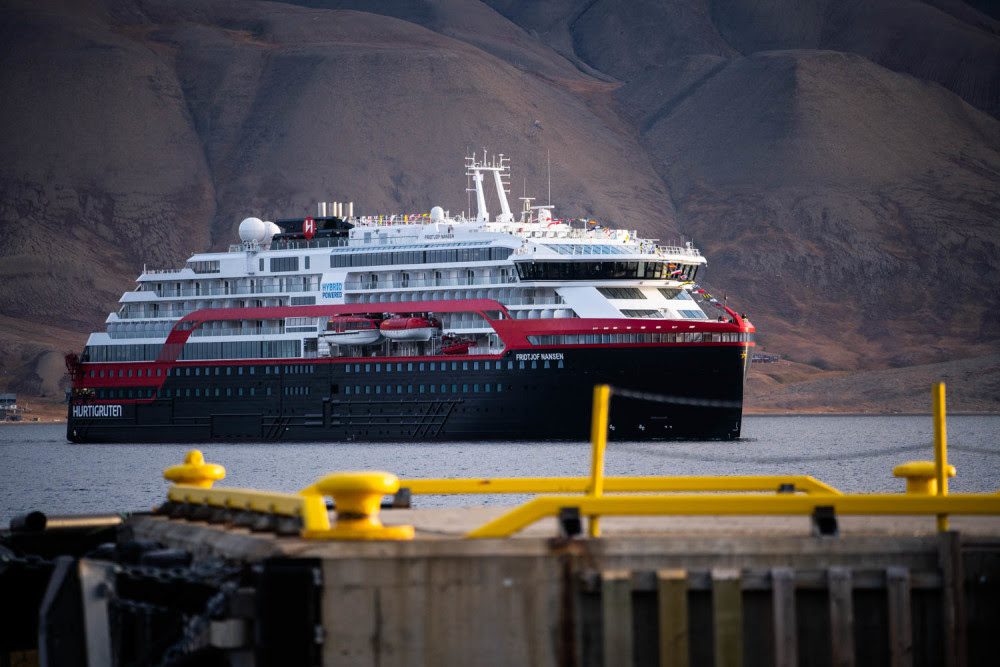 A new battery-powered hybrid expedition cruise ship owned by Hurtigruten Expeditions has been named in the arctic archipelago of Svalbard, making history the northernmost christening ceremony of a passenger ship.

The name of the new MS Fridtjof Nansen in Svalbard is significant because it is the place where Hurtigruten founded the Expedition Cruise in 1896.

“We are thrilled to celebrate over 125 years of exploration and adventure travel where it all began. We could not be more proud to recognize this milestone by naming this engineering marvel at the spot where our founder Richard With pioneered modern expedition cruises, ”said Daniel Skjeldam, CEO of the Hurtigruten Group.

The christening ceremony of the new MS Fridtjof Nansen, named in honor of the polar explorer, took place in Longyearbyen, Svalbard, often nicknamed “beside the North Pole” at latitude 78 North.

Replacing the traditional champagne bottle with a piece of ice, ship godmothers Hilde Fålun Strøm and Sunniva Sørby smashed the ice above the ship’s bow with a quote from famous polar explorer Roald Amundsen, when he named the polar ship Maud in 1917:

“By naming this unprecedented ship Fridtjof Nansen, in Svalbard, we are paying tribute to him as an explorer and scientist and to the rich arctic heritage of Hurtigruten Expeditions,” said Asta Lassesen, CEO of Hurtigruten Expeditions. “We also salute our long-standing relationship with the Svalbard community. This small-sized, hybrid-battery-powered expedition vessel will explore all waters – and he will proudly do so by calling Svalbard home. “

Alongside its sister ship, MS Roald Amundsen, the world’s first battery-powered hybrid cruise ships feature large battery packs and other green technologies, making them the world’s most expensive expedition cruise ships. environmentally friendly to the world. The 140-meter-long ships weigh 20,889 gross tonnes and were built at Kleven Yards in Norway. The ships have a cruising speed of 15 knots and are classified in Polar Class 6, which allows them to operate in medium first-year ice in summer and fall.

“Exploration is who we are. We will always explore. Today is a very special day for me and all of my colleagues aboard this magnificent vessel. We are delighted to welcome guests aboard MS Fridtjof Nansen to explore with us the most remote corners of the globe – and we are wholeheartedly committed to exploring in the most sustainable and respectful way, ”said the captain Bent Ivar Gangdal, captain of the MS Fridtjof Nansen.

Marking another first, the MS Fridtjof Nansen will also be registered in Longyearbyen, Svalbard.

A surprise with a story | New