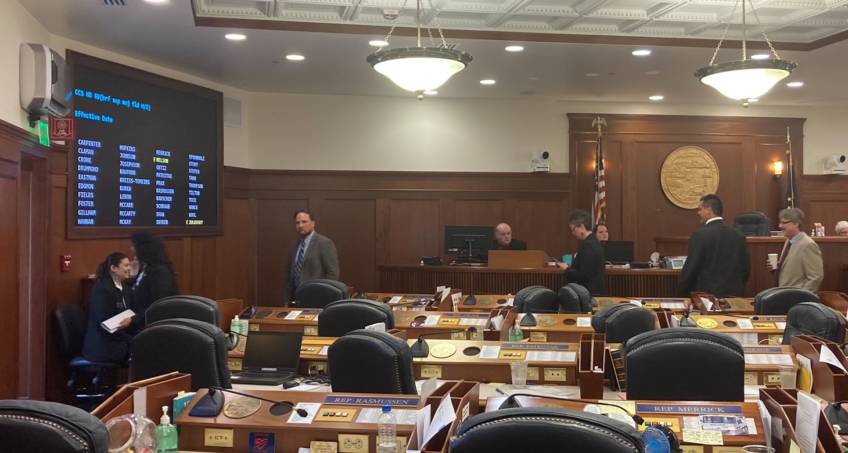 The long story behind the Alaska House minority caucus votes on the PFD, the shutdown

Members of the Republican Minority Caucus at Alaska House have been at the center of the Legislature’s most controversial arguments this year. Past minorities have used their power to influence state policy, but the Republican caucus has pushed further. While their approach is novel, it is rooted in the frustrations that have been building up among some Republican lawmakers and voters for years.

When lawmakers ended the session in early 2020 due to the COVID-19 pandemic, budget negotiators struck a deal that tied a vote that would lead to a permanent dividend of around $ 1,000 to fund emergency response to the pandemic.

If this vote had not been approved by three-quarters of the Alaska Senate and House representatives, the dividends would have been reduced to $ 500, instead of $ 1,000.

He was adopted, with no voice to spare.

Homer’s Republican Rep. Sarah Vance voted against it, although she was a supporter of bigger dividends under the formula of a 1982 law. And a day later, Vance criticized the way the budget had been. written to speak to radio host Michael Dukes.

“This is unacceptable,” she said.

“If it had been another year… we would have done it,” she said. “We would have called their bluff.”

A year later – this spring – Vance proved right. This time around, the vote would yield dividends of $ 1,100. And this time it failed, leaving the dividend funding to just over $ 525. After the vote, Governor Mike Dunleavy vetoed the remaining amount. So there may not be a PFD this year.

And electricity cost equalization, university scholarships for Alaskans and some other programs also remain unfunded.

At the center of that debate are most of the minority Republican House caucus, who joined Vance this time in voting no on withdrawing money for PFDs and other programs.

The money would come from the Constitutional Budget Reserve, or CBR, a state savings account that the legislature used to balance the budget. It took the approval of three quarters of the two chambers to pass.

Interviews with some of the members show why things have come to a head.

Big Lake Rep. Kevin McCabe was among those who voted no. The vote would also have funded construction projects in Matanuska-Susitna district, McCabe’s home.

He said there was too much pressure to vote yes.

“I hate being harassed,” he said. “And the six or so projects that they put into CBR that were specifically aimed at Mat-Su to get my vote. Frankly… I called it, Bullying Budgeting.

McCabe is one of eight House Republicans in the first term. All voted no to the agreement.

Some members said it provided leverage to support action on the governor’s proposals to change the state’s constitution.

McCabe likes Dunleavy’s proposal to resolve the size of permanent fund dividends through a constitutional amendment. New proposals to reduce spending or increase government revenue would be considered at a later stage. And McCabe said there’s a benefit to dealing with spending cuts proposals once the dividend is set: it would force cuts the legislature was unwilling to make.

“Frankly, you know, I’m the conservative and small government type and I believe our government continues to grow,” he said.

It’s a parallel argument to Dunleavy’s when he ran for governor: government spending is too high. Dunleavy later proposed cuts in his first year as governor. And a big public reaction to the service cuts fueled a recall campaign against the governor. Dunleavy did not offer these cuts in the next two budgets.

McCabe said the biggest lesson he learned from this budget fight is that communication in support of the cuts should have been better. He said all budget-funded agency heads should have been in sync with the governor. He pointed out that former University of Alaska President Jim Johnsen has spoken publicly about the impact of the cuts on the university.

“We all need to come together on the same message instead of fighting for limited dollars,” he said.

In addition, he voted against the entry into force of the budget date of July 1. The failure of that House vote led Dunleavy to say that much of the state government was going to shut down. The closure was prevented during a special session at the end of June.

Prax said he stood up for his principles.

“No one wants to shut down government, put all employees and all programs in such uncertainty – no one wants to do that,” said Prax, who is in his second term. “But… we the public have been talking about this for 20 years, ultimately.”

Prax wants votes on the three constitutional amendments proposed by the governor, or at least something similar that would put the dividend in the constitution, limit spending, and require public votes on new taxes.

Prax also wants the PFD to be resolved first. He said Alaskans should receive the dividends according to the formula provided by state law. This year, that amount would be around $ 3,700, while Dunleavy proposed dividends of around $ 2,350 under a constitutional amendment he proposed. And Prax said Alaskans should be reimbursed for what they would have received over the past five years had the state followed the formula. In total, this amount would amount to more than $ 10,000, or nearly $ 7 billion in permanent fund income.

It did not come to any conclusions on changes to be made to dividends and government spending, as well as taxes or other revenues. He expressed frustration that many of his questions were not answered during this year’s budget process.

“To make informed decisions, we need information,” he said. “And life is not just a ‘yes / no’. But it’s’ yes, no and I need more information before I can make that yes / no (decision) decision. ”

McCarty also noted that this year is different because the balance of the constitutional budget reserve is lower than in the past.

“It’s our safety net money,” McCarty said. “If there has been a major disaster, where is the money to cover these kinds of needs? And we don’t have it anymore.

He said there should be bigger cuts in state agency spending than has happened in the past five years. He also said the state should spend money on rebuilding the constitutional budget reserve. And he said he needed to invest in his infrastructure, from maintaining roads and bridges to increasing the amount of food grown in Alaska to increase its food security.

Fairbanks Democratic Representative Adam Wool said the new Republican minority had gone further in their demands than previous minority caucuses. He said that for the legislature to work, the minority can have a say, but ultimately their power should be limited.

For example, during his first two years in the legislature as a member of the then-Democratic minority, he used his power to block withdrawals from the Constitutional Budget Reserve to protect tens of millions of dollars in funding. education, while members of the current Republican minority backs dividends from permanent funds that would cost at least $ 1.5 billion.

Laine also rejected the argument of Republicans in the minority caucus that their voices were not heard enough in the budget process. Wool said their voices were heard, but most of their proposals did not get the necessary votes.

Wool said the numbers for Republicans in the minority caucus did not add up.

And he expressed concern that they want to pull more than expected under a law to limit withdrawals from permanent fund income. He noted that at the same time they criticize the reduction in the amount in the CBR.

Laine proposed a bill to change the dividend formula and introduce an income tax among other provisions. The measure aims to balance the budget in the long term. Wool noted that none of the Republicans in the minority caucus had presented a detailed plan.

“I am waiting for them to come up with a balanced budget plan for the future, with balanced income and expenditure, including the PFD, without putting the (permanent) fund undercoverage,” he said.

An extraordinary legislative session is due to begin on August 2.

What to wear for a job interview

Two fishermen on a fishing expedition drown in Ondo