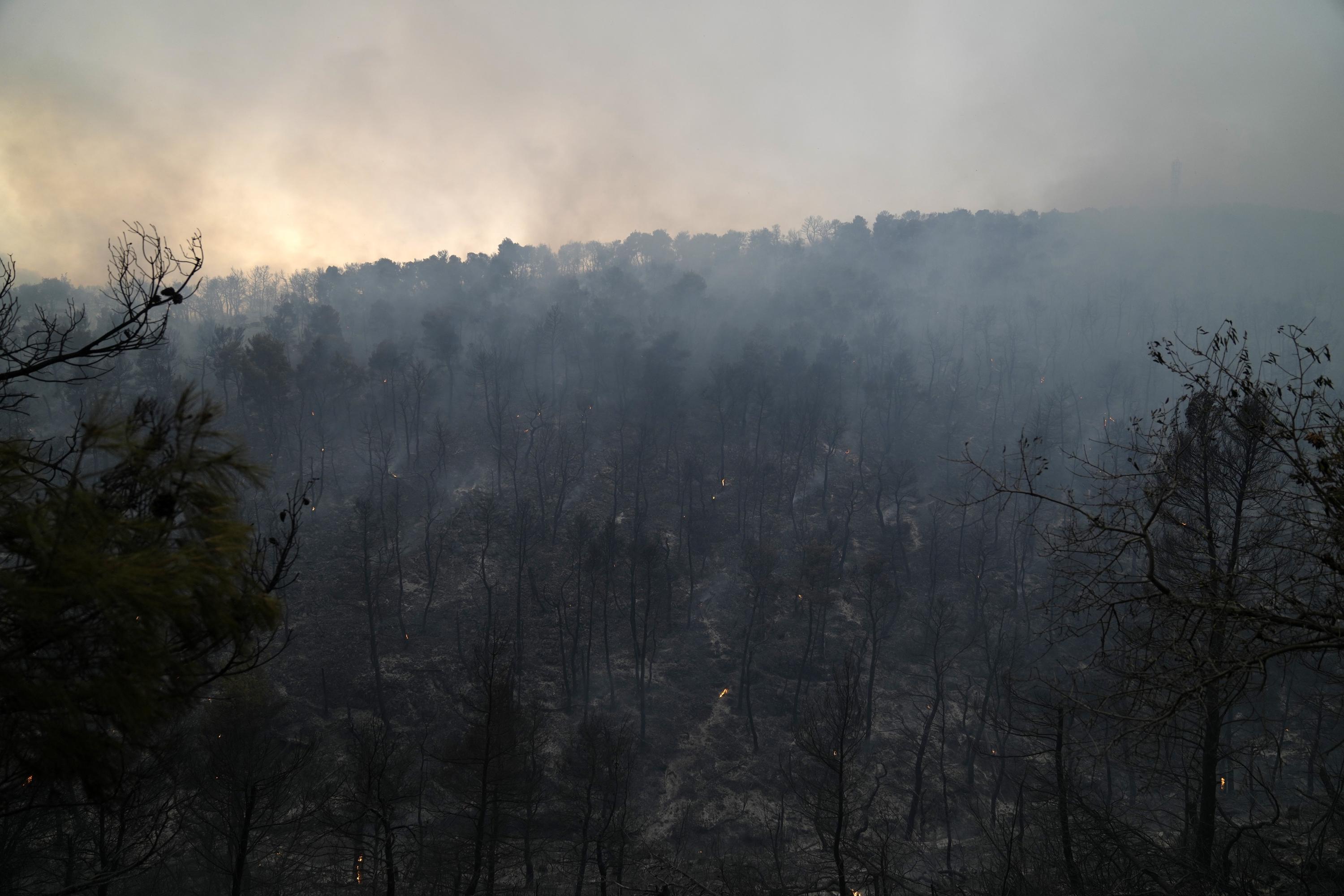 Thousands of people are fleeing fires in Greece, Turkey; some rescued by the sea

DROSOPIGI, Greece (AP) – Thousands of people fled uncontrollable forest fires in Greece and Turkey on Friday, including a major blaze just north of the Greek capital of Athens that left one dead, while a prolonged heat wave turned forests into powder magazines and flames threatened inhabited areas, electrical installations and historic sites.

Turkey’s wildfires, described as the worst in decades, have swept across swathes of the southern coast in the past 10 days, killing eight people.

In Greece, firefighters were fighting 56 active forest fires, civil protection chief Nikos Hardalias said. Multiple evacuation orders have been issued for populated areas on the mainland and the neighboring island of Evia, while the blaze near Athens burned forests and homes on its way to Lake Marathon, the main water reservoir of the capital.

“We are continuing our hour-by-hour efforts to tackle the multiple fires we face today,” said Hardalias. “The conditions are exceptionally dangerous. The wind picked up on Friday afternoon in many parts of Greece, increasing the risk of fires.

Athens’ main trauma hospital said a 38-year-old man died from a head injury caused by a falling power pole in Ippokrateios Politeia, one of the neighborhoods north of Athens affected by fire.

In Evia, the Coast Guard staged a major operation to evacuate hundreds of people by sea, using patrol boats, fishing and tourist boats and private vessels to rescue residents and vacationers overnight and up to Friday. Dozens of other villages and neighborhoods were emptied in the southern Peloponnese region and just north of the Greek capital as the fires swept through the pine forests.

“We are talking about the apocalypse, I don’t know how to describe it,” Sotiris Danikas, head of the coastguard for the town of Aidipsos in Evia, told public broadcaster ERT, describing the evacuation by sea. .

The coast guard said 668 people were evacuated from beaches in northeastern Evia early Friday afternoon after the flames cut off all other means of escape. Coastguard ships continued to patrol the coastline.

A coast guard ship was also rescuing 10 other people trapped on a beach by another blaze near the town of Gythio in the southern Peloponnese region.

Greek and EU officials blamed climate change for the multiple fires which ravaged parts of southern Europe, from southern Italy to the Balkans, via Greece and Turkey. Massive fires have been burning for weeks in Siberia in northern Russia, in hot, dry, gusty weather also fueled devastating California wildfires, decimating entire cities in some cases.

Greece suffered its longest heat wave in three decades, with temperatures reaching 45 degrees Celsius (113 degrees Fahrenheit). Thousands of people have fled their homes and vacation homes, while at least 20 people, including four firefighters, have been treated for injuries. Two of the firefighters were in intensive care in Athens, while two others were hospitalized with minor burns, the health ministry said.

In Turkey, authorities evacuated six other neighborhoods near the town of Milas in Mugla province on Friday as a windswept forest fire burned about 5 kilometers (3 miles) from a power plant. At least 36,000 people were evacuated to safety in Mugla province alone, officials said.

Meanwhile, several excavators cleared strips of earth to form firewalls in an attempt to prevent flames from reaching the Yenikoy Power Plant, the second such facility to be threatened by forest fires in the region.

The forest fires near the tourist resort of Marmaris, also in Mugla province, were largely contained on Thursday evening, officials said, while on Friday afternoon the two main fires in neighboring Antalya province were under control and cooling efforts were underway, the agriculture and forestry minister said. Bekir Pakdemirli announced on Twitter.

In Greece, firefighters went door to door in areas about 20 kilometers (12.5 miles) north of Athens, telling people to evacuate, as helicopters dropped water on towering flames and thick smoke blanketed the area. Authorities sent push alerts to cellphones in the area urging residents to leave, while a refugee camp on the outskirts of the capital was evacuated overnight.

Constant outbreaks threatening populated areas have hampered the work of hundreds of firefighters.

In the Drosopigi area, a resident of Giorgos Hatzispiros examined the damage to his house on Friday morning, the first time he saw it after being ordered to evacuate the previous afternoon. Only the charred walls of the single storey house remained, along with her children’s bicycles, somehow unscathed in a storage room. Inside, smoke rose from a still smoking library.

“There is nothing left,” Hatzispiros said. He urged his mother to leave, to spare her the sight of their destroyed house.

In southern Greece, dozens of villages and settlements were evacuated, where a fire was stopped before reaching the monuments of Olympia, cradle of the ancient Olympic Games.

The fires also disrupted COVID-19 vaccinations. The health ministry announced the suspension of vaccinations at centers in areas affected by the fires, saying appointments could be postponed when conditions allow.

“Our priority is always the protection of human life, followed by the protection of property, the natural environment and critical infrastructure. Unfortunately, under these circumstances, achieving all of these goals at the same time is simply impossible, ”Prime Minister Kyriakos Mitsotakis said in a televised address Thursday evening.

Forest fires, he said, show “the reality of climate change.”

In 2018, more than 100 people died when a rapid forest fire engulfed a seaside settlement east of Athens. Some of them drowned while trying to escape through the sea of ​​smothering smoke and flames after being trapped on a beach.