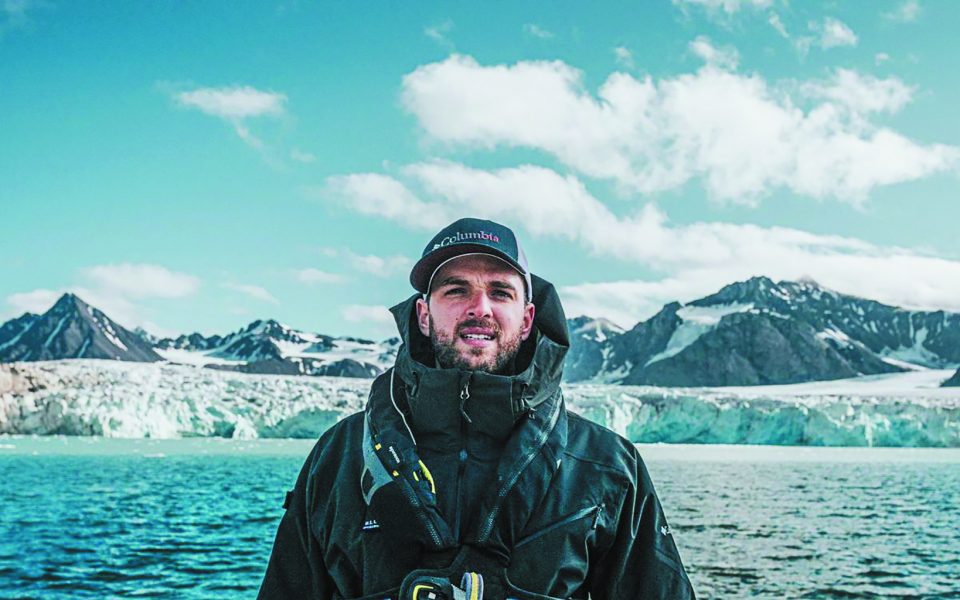 Young people will save the planet, activist says

“The changes induced by climate change are more intense and more visible at the poles,” said Marios Giannakou, who took part in an arctic expedition to the North Cape, Europe’s northernmost border, last summer.

On the day the massive forest fire started in Varybobi, north of Athens, in early August, Marios Giannakou was on an expedition to the Arctic Circle, exploring the Norwegian fjords in a sailboat.

The “Up In The Arctic” expedition reached the North Cape, the northernmost border of Europe. “We had some cell service, so I was able to read the news, but we had no internet coverage for the next week.

In the Arctic, “we experienced something of what the people here in Greece were experiencing, albeit in a different way. We were on the bridge when we saw a massive section of a glacier, as tall as a six-story apartment building, peel off and collapse into the sea. It’s a scene I will never forget. never. The changes induced by climate change are more intense and more visible at the poles compared to areas closer to the equator. They occur three times faster, according to scientists.

I look at Giannakou’s face on my computer screen and see a young man in his early thirties who definitely stands out from the crowd. During his first year as a student of German literature at the University of Thessaloniki, he went from an overweight chain smoker to an ultramarathon runner in a matter of months, running hundreds of kilometers at a time on the ice, in the jungle and desert.

But beyond this tremendous achievement, he also embodies the sensitivity of many men and women of his generation and younger generations for the environment, and their desire to adopt a different way of life, respectful of the planet and its people. human and animal occupants. It is telling that one of the biggest challenges he faced, in October 2020, was carrying Eleftheriou Tosiou, a 22-year-old quadriplegic college student who dreamed of climbing Mount Olympus, to its peak on his back.

Our interview could not take place in person after his return from the expedition, Giannakou having returned directly to his home in Thessaloniki, where he runs an advertising agency. Born (in 1992) and raised in the northern town of Drama and with roots in a nearby mountain village, he learned to love nature from an early age from his grandmother, who loved long walks and hikes, and his parents, who took him on excursions to the many beautiful sites in the region.

But running around places like Rovaniemi in Lapland and the Al Marmoom Desert Conservation Reserve in the United Arab Emirates has whetted his appetite for exploring wild landscapes. And his last excursion? “The trip to Norway was aimed at recording some of the problems associated with climate change and marine pollution. We traveled 1,722 kilometers in a month, spending all the time on the boat. We also want to produce a documentary that will make young people even more aware of environmental protection, ”he says.

“The trip was a revelation about what is happening in the Arctic Circle and the impact of rising temperatures on the landscape, flora and fauna. You see the harsher side of climate change here, with glaciers shrinking or disappearing altogether. This is where you realize that if we don’t take drastic action, our children will be faced with situations that we can hardly imagine right now. It’s the same with animals. We have seen polar bears and beluga whales, species adapted to arctic conditions, struggling with rapid change, ”says Giannakou.

“What I want to say after this experience, to convey something that I saw with my own eyes, is that the problem is no longer at our doorstep; it is with us. I think that as humans we have done more harm than good to our planet. On the other hand, I see a ray of light in the consciousness that my generation seems to have of the climate and of pollution, ”he adds.

I couldn’t help but play devil’s advocate and ask him how he expects today’s young Greeks to prioritize the environment as so many people struggle to find decent work after a decade-long crisis and an ongoing pandemic. My pessimism does nothing to curb his optimism.

“As a long-distance runner, I can tell you that life is an ultramarathon. You will face injuries, bad times, obstacles, exhaustion, cold feet. But there is nothing else to do but keep going, getting stronger and stronger through each ordeal. These are the facts and they will not change. So instead of complaining, let’s see what we can do instead of waiting for solutions from others, ”he says.

“We need to focus on the solution rather than the problem; we have to rely on our own potential, however small it may seem. At least that’s what I do.

His life is certainly a good example of this philosophy. Before deciding to register for his first big race, he was overweight and smoked three packs a day. But he was motivated to change by the ordeal of a friend with a serious health problem. Instead of heading to his local gym, he discovered cross-country running and continued to enjoy pushing his body to its limits in extreme conditions. Now, he is one of 14 people in the world to have completed the 150km Arctic Circle winter race in February 2018 and one of 18 to cross the finish line of the Al Marmoom 270km ultramarathon la same year – and he holds the world record for the oldest desert. ultramarathoner for this effort. Last year, meanwhile, he ran 230 kilometers in the Coastal Challenge in Costa Rica and also broke the age record in the 170K Rodopi Ultra Trail in northern Greece. And, as he completely changed his life, his friend, Alexandros, recovered.

“It may sound contradictory, but I find the long distance running very relaxing. It makes me happy and balanced. Just to debunk a myth that may exist about sports, I feel like I’m doing the same thing as someone who finds their inner balance by reading or painting. Or, as the saying goes, every journey begins with the first step – all we have to do is do it, ”Giannakou emphasizes.

But where does he find the strength to continue after this first step?

“Anything that feels good for our body and soul and brings out a better version of ourselves can motivate our determination to go further – as long as we don’t give up at the beginning, when it’s difficult. For example, I don’t always run or train. I can even gain weight from time to time. But I start over, believing that if I’ve done it once, I can do it again.

Giannakou’s most inspiring accomplishment has been helping Eleftheria Tosiou fulfill her dream of climbing Mount Olympus by carrying her on her back, in a specially modified backpack.

Tosiou is also from Drama and shared his desire to see the mountain during a chance encounter one day. He organized it all and made it possible.

“Eleftheria was so happy! As soon as we reached the top she asked me to do a 360 degree turn so she could see the view. I think nothing is more wonderful than that. No medal in any race can give you so much joy.

Cambridge city views: what to know before the first snowfall | Columns